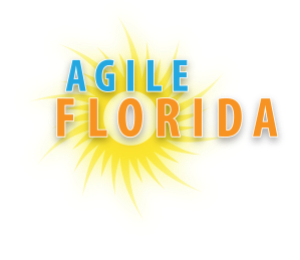 This post is part celebration of agile in Florida and part bitter-sweet memories for me.  I rarely share personal stories nor long blog posts, but I share the following to encourage others who struggle with building a “user group” or building anything from scratch that cannot be built alone.  This is also for those who believe in agile values and the power of collaboration.

An agile party in Florida

First, let’s talk about the celebration.  Just over a month ago (late June 2015), we celebrated our second Agile Open Florida conference with over 160 participants.  It was also the fifth agile user conference in Florida over the last three years.  Agile has been growing rapidly in Florida due to three very active user groups that have banded together to share knowledge, resources, and inspiration: AgileOrlando, Tampa Bay Agile, and South Florida Agile Association.  Across the three groups, we are approaching 2200 members this month with hockey-stick growth for the year.  We also have two new agile user groups growing in the state (AgileGNV and the Agile Space Coast) with possibly others ready to sprout.  Stephanie Davis (of Tampa Bay Agile) and I will share more of this celebration story of AgileFlorida at Agile2015.

Now the bitter-sweet part of the story which was triggered by Ken Schwaber’s recent blog post.  In that post, Ken references a group called Orlando Scrum that shut down in 2009 in reaction to a notice from the Scrum Alliance.  I wanted to provide more context as I was one of the co-founders of Orlando Scrum.

First, a little background on how I got to Orlando Scrum.  I had started with XP practices in 1999 when I read Kent Beck’s article in IEEE Computer and used every opportunity to introduce these principles and practices in the central Florida tech community of the early 2000s.  I found agile approaches to be a much less painful way to live in my software world.  I gave some of the first talks on agile in central Florida by 2005.  I heard many crickets those days.  However, I was hired in 2003 to “introduce that agile stuff” to a company I had previously worked for that was rebooted from a dot-bomb in 2001.  It was also in 2005 that Ken Schwaber started consulting with this same company where I worked. In taking the CSM course with Ken in May 2005, the broad application of Scrum beyond software blew my mind.  I was a convert to Scrum.  This was a better way to work!

Now let’s talk about the start of Orlando Scrum.  Fast forward to 2008.  I was well into my personal transformation into a Scrum zealot.  I had joined Rally Software as an agile coach and was doing well with small to medium agile transformations (<200-400 people involved), and really wanted to bring back what I had learned to Florida.  I had found two other Scrum enthusiasts in Orlando to help me start a group in 2008.  Since Scrum was the most popular framework of the time, we picked the name Orlando Scrum.  We also chose to have no dues and give away training.  We were selling nothing.  We just wanted Scrum to be successful in central Florida.  (Disclaimer: Two of us were consultants. So we were also hoping this would raise opportunities to work closer to home in sunny Florida. But we did not pitch our work in Orlando Scrum.)

By early 2009, we had several small successful gatherings of Orlando Scrum and were seeing growing attendance (sometimes 40+).  An agile fuse was lit in Florida.  Also, I was beginning to work on larger agile transformations across the USA (>800-2000+ people involved).  I would have more to share with my community!  Rock on!

Then, in April 2009, Orlando Scrum received “paperwork” from Scrum Alliance that we were infringing on their rights through use of the term “Scrum” in our name, Orlando Scrum and we would need to sign a multi-page licensing agreement to continue to use the name.  As an all-volunteer group with no financial backing or legal support, it felt overwhelming.  One of my co-founders was infuriated by this and publicly posted on our blog that Orlando Scrum will be shut down.  While I emphathized with his position, he did not discuss the shutdown with me or his fellow co-founder.  Ken Schwaber tried to reach out via comments on the Orlando Scrum blog.  Cory Foy (whom I’d met at Agile2007 in a Florida OpenJam discussion) also joined in the online conversation.  Cory even texted me while I was working at a client.  By the time I was free that evening, the damage was done.  My co-founder would not return calls, text or email.  A year’s worth of work and collaboration was gone.

Fiery debates flared briefly in the online community as described at InfoQ. Cory tried to help by taking on a role at Scrum Alliance to make sure this didn’t happen again.  Unfortunately, no one was successful.  It was too late for Orlando Scrum.  It quietly vanished into history.

Inspecting and Adapting from a failed user group

So what happened after that?  I still wanted to share what I learned with Florida. I had no time for angry online tirades. Instead, I inspected and adapted.  I found other tech leaders who had similar interests, around Orlando and across the state.  I eventually found entire groups of them.  I shared what I had learned, even if I had to drive hours to do it.  I wanted to give back to the place where I got my start.  It took three years to re-start and WE were successful! It was not just me, but I like to think I was a small contributor.  So I’ll share more details of the success story at Agile2015 as I said earlier, but the outcome is Agile is thriving in Florida!  Mission accomplished!

Do I feel Scrum Alliance made a mistake in 2009? Yes.  The mistake was how they contacted us.  Reaching out personally before sending a letter like they did would have been a better approach in my opinion.  As stated in the InfoQ article, there seemed to be a lack of sensitivity for user groups started by volunteers just who wanted to share their enthusiasm for agile and Scrum.

Do I feel Scrum Alliance (SA) was making a mistake in 2015 for registering a trademark for “Scrum User Group”?  Honestly, no. You need to be aware of some other characters in this drama who have recently entered the agile community and are trying to claim the hard work of others.  Does SA need protection from them?  Maybe.  I would support SA in such efforts.  Obvsiously, I’m not holding grudges against the SA (though I did in 2009).

I came to realize that organizations are machines like any other.  It’s the people running the machines at the time that are accountable. As Cory pointed out, the SA of 2009-2010 was in disarray in handling it’s rapid popularity and growth.  The “trademark” filing then was a knee-jerk reaction in my opinion.  But the SA of 2015 is a different organization.  You can see evidence if you scroll down to the very final comments of Ken’s post (Manny Gonzalez on July 23, 2015 at 10:54am).  Manny is the new CEO of SA.  He listened to the community and Ken and they pulled the trademark filing in a week.  Bravo on listening to the community!  Now “community”, let’s collaborate on protecting the abuse of others.

What are the lessons for user group leaders?

Be clear on your vision and keep a hold of it.  But be prepared to pivot on how it will actually take shape.  After Orlando Scrum bit the dust, a few of us struggled to rebuild it into “Agile Orlando”.  It never really took off.  But we didn’t give up.  I looked for the minimal viable meetup to share my knowledge of agile and found it in lean coffee.  I even taught others across Florida how to run lean coffee.

Then, I connected with folks online (email and social media) and through conferences.  I spoke to MANY other user group leaders in my area and across the country to find out what worked at what didn’t.  What I found was a network that had yet to be built: a network of agile user group leaders to share ideas and resources, to collaborate on events that benefit a broader community, and (most important) to support each other in tough times.  That’s what we built with AgileFlorida and the story I told at Agile2015 with Stephanie Davis.  There is so much more to share and celebrate.  I hope you can join us at Agile Florida.

You can read more of the history of Agile Florida here.

September 2021 update: Despite the pandemic, AgileFlorida continues to survive.  There was a painful decision to cancel this year's Agile Open Florida event, even though it moved brilliantly to online in 2020.  Eighteen months of pandemic has made it difficult for volunteers to have the capacity to plan the event in 2021.  I'm confident it will return in 2022 because there are many that are passionate about this community and how it shares knowledge and connection (i.e., experience and networking).  By the way, Agile Open Florida has always been an inexpensive event to support anyone on their agile journey.

However, another development was not long after our Agile2015 presentation. The Agile Alliance asked Stephanie Davis (who was on their board at the time) if what we did in Agile Florida could be replicated more broadly.  This became the inspiration for the Agile Alliance Community Group Member Initiative which still runs today. Started by Stephanie, myself, and our Agile Florida cofounder, Ryan Dorrell, we have since stepped down as co-directors to allow others to lead.

As of September 2015, over 100 agile meetups and 100,000 people are supported by this Agile Alliance member initiative. It runs on a very low budget and new agile meetup leaders can get help through the online community. Oddly enough, the Scrum Alliance User Groups started not long after this. They even ran on the same Meetup Pro platform for a while. They say imitation is a form of flattery. I'll say we were successful in building a useful model for helping people build experience and their own personal networks without involving expensive certifications.

This site uses Akismet to reduce spam. Learn how your comment data is processed.